A 3D racing game in Flash with Away3D 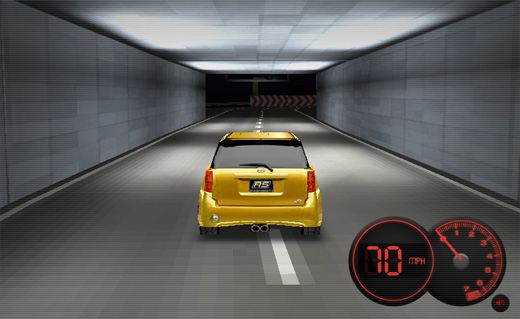 I am proud to announce my latest project. It's a 3D racing game done in Flash with Away3D.

The project required to use my Actionscript and 3D modeling skills together on a scale like I never did before. I spent a lot of time with Blender and Unity in the last months, and without this experience I feel the project would be beyond my abilities. Also, having a direct comparison between Flash and Unity allowed be to see things in a larger perspective.

I built the game with Away3D FP10. I must say that Flash 3D has gone a long way since I first started to play with it, and Away3D is a very solid engine. The 2K polygon limitation is a thing of the past, and the correct perspective projection in FP10 makes everything look so much better. The team also added some other crucial features to create 3D environments – ex. frustum clipping.

Before starting this project I was working on a Unity3D racing demo, so I managed to get quite a few ideas on how to build such a thing. However, when I moved back to Flash, I was a bit desperate because I realized how much stuff I got used to in Unity is just not there in Flash. A built-in physics engine would be the most important one.

For physics in Flash I was tempted do use JigLib at first. But soon I found out that JigLib is way too complex, creating a realistic car behavior would be very difficult and it would probably eat too many CPU cycles.

I estimated that Away3D will take around 90-95% of available processing power, so there's no space for any other complex piece of code to run in the same time. I always think that when it comes to 3D in Flash performance is quality, and there is no excuse for poor performance, even if you want something to look "realistic". So I ended building something very very simple.

Once I got the car driving around, I needed to add some collision detection. In Unity you quickly get used to the fact that any 3d object is a collider which makes collision detection a no-brainer – just implement a listener method and get a call whenever your object collides with another one. And if you need to add realistic collision response, you just make the object a rigid body and there you go! (Ok, you may need to adjust some settings, but still it's pretty straightforward).

In Flash it seemed like a much more complex task. I was thinking in the lines of creating a system based on the geometry of the track. I started to study curve equations just to realize I wouldn't make it even if I had a year to complete the project! Then I remembered, that a good way to test collision with complex shapes is a bitmap.

The way it works is that it takes the car's position and checks against a map of the track that has different colors for different areas – ex. red for the road, green for the sideways and so on… Since it samples only a few pixels per frame and all it does is check their RGB values, it's lighting fast. Truly, Flash is the art of minimal!

The most fun part was to create the scenery. I've never tried to import such a large 3D scene into Flash so I wasn't even sure if Away3D would handle it. It turns out it did handle it pretty well. 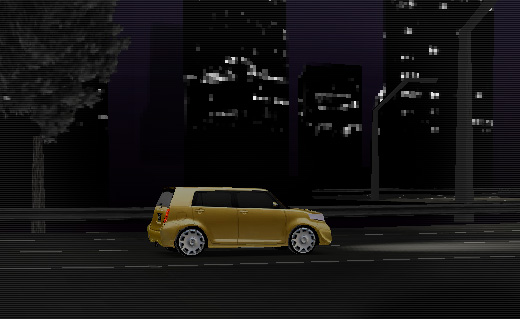 Instead of using Collada I went with Wavefront (OBJ) format for the meshes as I feel it gave me more flexibility. OBJ is a simple format which makes it a bit easier to see what's going on while Collada is bloated and overly complex for my taste. I used Blender to model the track and the few objects that you can see around it – lampposts, houses and the tunnel.

Lightning is very important in low poly scenes, because it adds a lot of detail and atmosphere to the scenery, without adding any polygons. Even thought the scenery is simple, I ended up having more that 60 lamps. Of course all those lights needs to be baked on the textures, there's no way to run them in real-time. Blender has a very good texture baking tool and all this works fine for static objects. But what about objects that move, like the car? 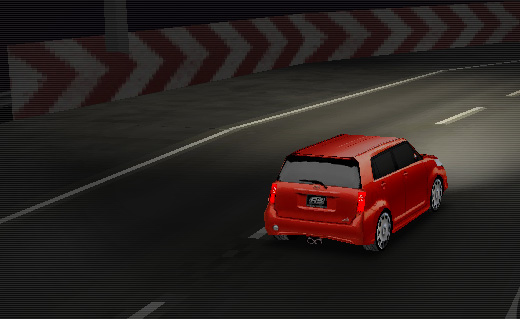 For lightning the car, I reused the concept from collision testing. But instead of a collision map I made another one – a light map. Basically it's a bitmap with white areas where the scenery is lit and dark ones where it's not. By sampling a single pixel on every frame I can see if the car is passing through a lit area. Then, all I have to do is to apply a color transform on the car texture to make it brighter. Again – a minimal solution, but it works!

Now that you know all about it, go ahead and try it out!