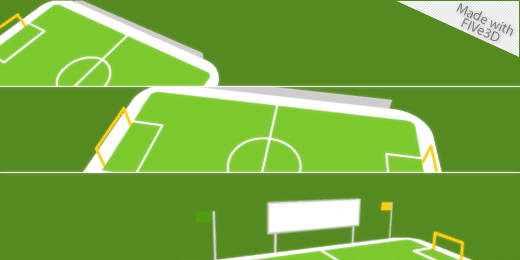 Ever since Mathieu Badimon released FIVe3d AS3, I was thinking that it would be great to build a 3D animated banner using this library.

The main challenge with banners is obviously the file size. I had to customize FIVe3d a little bit for this one. By organizing some imports and removing some parts of code I did not use I gained a couple of kilobytes. For the animation I used TweenLite, which is a much lighter alternative to Tweener. My final result is around 40KB. My original plan was something closer to 30KB… but ok!

Except for the final 2D animation of the logo, everything is 100% script. All the 3D objects are drawn in code using the FIVe3d drawing functions (which are based on the standard Drawing API). The result is around a 1000 lines of code, plus the code of the libraries – pretty much for a banner, huh?

At Multimania in Belgium, I've seen Serge Jespers from Adobe presenting a sneak peak of Flash CS4 IDE. It seems that it will be possible to prepare this kind of animations directly on the timeline… and probably in a matter of a couple of hours! So this kind of experiments will become obsolete. Nevertheless, this is still a distant future and now FIVe3D rocks!

For anyone who wants to see how it's done here are the sources. The code is not super clean, but I hope it is readable. As always I release it under MIT license.

As a final note, a few words about the site this banner was made for. Futbolowo.pl is a community site run by a friend of mine (it is all in Polish only). It allows local football clubs to run their websites based on a specialized content management engine.