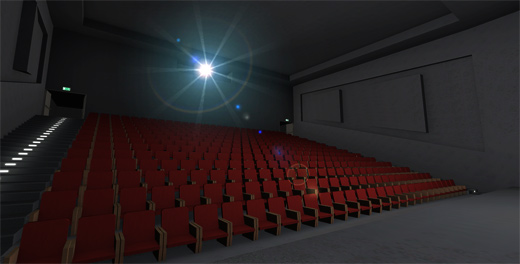 Here's a little piece I made after the image decomposer. This time I wanted to load videos instead of images.

I had the idea to project them on a big screen so that the user can actually feel like he is in a movie theater. I started to play with it, I modeled a cinema interior, setup the lightning and I thought it's pretty neat.

You can walk around the theater with cursor keys and space to jump over the seats. If you go into the corridor in the back the movie will pause (wouldn't it be nice if that happened in real life too?). Use the left mouse button to toggle a flashlight.

Unity3D currently supports videos in Ogg Theora format only. Although it's free, it is not very popular on the net. It's mainly used by Wikipedia and Archive.org for the video content.

The demo works the same way as the image decomposer, which means you can append a URL to any valid Ogg video on the web and you should be able to watch it. To start, here are a few interesting movies I found:

Dynamic loading of videos in Unity is easy and it's well documented. The code is almost exactly that same as with images. I won't publish the sources this time because there is very little code in it, on the other hand there are over 50MB of textures in a pretty big mess.

If you find (or create) an Ogg encoded video worth watching post a link in the comments.