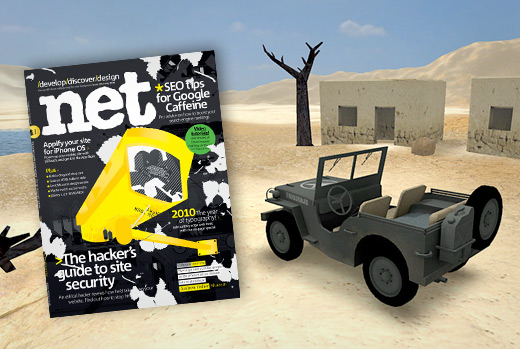 Recently I had the privilege to write an article for .NET magazine. It's an introductory tutorial to Unity3D in which you'll see how to build a car simulation in a simple desert scenery.

Those of you who had attended my sessions at FITC Amsterdam and at the March LFPUG meeting have already seen me building it live. The nice thing about Unity3D IDE and its drag & drop abilities is that you can actually create a car simulation in 10 minutes. But don't be fooled, because tweaking it afterward takes ages - as with everything else. Anyway, now you can see and try it yourself. I hope you'll like it!

The tutorial will lead you through different features of Unity3D like the terrain editor, 3D assets import, built-in scripts, projected shadows and particle system. It is available in the UK and elsewhere in Europe from March 30th (issue 201). It will be published in the US and Canada too, but a month later (also please note that .NET Magazine is called Practical Web Design on the other side of the Atlantic).

To make the tutorial as enjoyable as possible I put in all my modeling skills to create a nice car - a classic U.S. Army Jeep Willys. I also added a few simple scenery models like a hut and a dried tree trunk that can be used as obstacles. You can see a demo based on those models here.