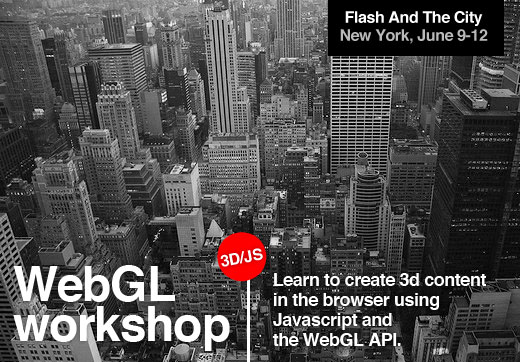 Last year (2010) I did a few training courses in London. I was quite fun, so this year I plan to do more. To start with, I'm preparing a new workshop about webgl.

I have worked with webgl from the beginning of this year. It's completely different from Unity or Flash/Away3D, and I guess it doesn't give the "immediate fun" feeling that Unity does when you approach it for the first time. Quite the contrary, the kind of old-school, C style API can be intimidating, and the scarcity of resources adds to the image of a unapproachable technology.

Fortunately, reality is not as bad as it seems. WebGL can be quite fun to play with as soon as you understand some basic rules. Furthermore, it is based on Open GL ES which is an established standard for 3D graphics on mobile devices (implemented both in Android and iOS). Getting to know WebGL is a good way to introduce yourself to these technologies as well.

I'll be doing the webgl workshop as part of the Flash And The City conference in New York on June 9. The workshop will focus on how to build 3d content from scratch with Javascript and we will see some techniques for importing 3d models and animations right into your browser.

If you don't want to miss the event, be sure to get your ticket today. The number of places is limited. Use discount code webGL and they get $50 off!

For the workshop make sure to bring your laptop with your favorite Javascript editor along with the latest version of Chrome or Firefox and prepare for some serious (and seriously fun!) 3d stuff.

See you in New York!